It was nearly three decades ago that I had the occasion to interact with Prof. Bhandari. Those were the days of telex messages and the fax machine was just attempting to raise its head in an office set up. Today, of course, the word fax has become somewhat outdated and office has a different connotation, given the software world that permeates our surroundings.

Sometime in late spring of 1984, while I was working in Tokyo as the First Secretary (Economic and Commercial) in the Indian Embassy, Prof Bhandari got in touch with me with a query to ascertain whether the Embassy could assist in crafting a programme of meetings and visits for a delegation of Senior Executives from public sector undertakings. It was a moment to savour! Why?

I had been on study leave from July 1980 to April 1982. In that period I "did my MBA" from IIM, Bangalore, specializing in Marketing and Transport Management. During the time at IIM Bangalore, we heard a lot about Prof. Bhandari's expertise in teaching Marketing and also his ability to relate concepts to happenings in the environment with consummate ease. It was our desire to be able to attend a lecture by such an accomplished person. However, that was not to be.

So, when this message came to me in Tokyo, it was nothing short of a gift. His proposed visit to Japan was something that gave me the opportunity to interact with Prof. Bhandari from a country that (at the time) was the leading innovator in anything and everything. I was therefore looking forward to be able to listen to him and exchange ideas and views with him on anything in the Japanese setting, which was economically the most vibrant then.

Our interactions covered three phases: before the delegation arrived; then with the group after it did and during the visits to various plants and finally, during an enjoyable evening at my place over dinner.The exchange of communication with him showed how precise he was in his thinking and how he chose his words carefully. The delegation which was sixteen strong comprised senior executives from public sector units who were probably in the zone of contention for bigger responsibilities in their respective organizations. The visit went off extremely well. They visited plants in and around Tokyo in the automobiles, electrical equipment, and power sector among others. The firms visited included Toshiba, Hitachi and a Nissan Plant not far from Tokyo. The group photograph below was taken during one such visit to a plant (I think Toshiba, but then I could be mistaken). 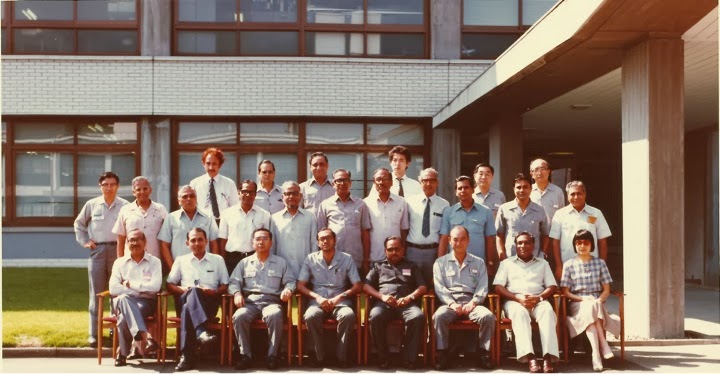 LRB (seated 4th from left) and N. Ravi (seated 2nd from left) with public sector executives and their Japanese hosts

I still recall Prof. Bhandari saying to me that the competence of the executives in the group being second to none in the world. He particularly commented on the constraints they worked under and how, if these were removed, they could really work wonders. In another context, he mentioned that in terms of technological competence we in India (in the early eighties) were as good as the rest but the combination of a lack of work ethic and bureaucratic regulations held back diversification and expansion of production all round. In the background of the high level of quality built into many Japanese products, he said (I presume in a lighter vein) most Japanese consumer goods did not need marketing, they sold themselves!

Prof. Bhandari was a pleasure to be with. He was a keen observer, a man of few words but telling ones when they were uttered. His observations about research in Japan especially in the field of science and technology and how it would stand them in good stead were prophetic. He was appreciative of their determination and focus, with the objective of becoming "world number one" and said that such an attitude was a distinguishing hallmark of the Japanese.

*Mr. Ravi was a member of the Indian Foreign Service, and held several diplomatic positions, including India’s first Ambassador to ASEAN. He is currently a Senior Fellow at IIM, Bangalore. He interacted with LRB while working at the Indian Embassy in Japan.

Posted by Apoorva Bhandari at 22:52