In April 1970, LRB was a Product Manager at Hindustan Lever Ltd. In this position, he had the overall profit responsibility of the company's flagship product - Surf Detergent Powder. His company 'rated him very highly' and was about to give him an out-of-turn promotion. Amongst the IIM-A community, he was seen as a rising star.

On the 9th of April, the first IIMA reunion took place at Ahmedabad. LRB and other alumni were invited to speak at the conference. The picture below is of the afternoon session - when all those seen in the picture gave  talk on "MBA Programmes : A look into the future". Among the speakers was CK Prahalad, who would become a dear friend. LRB's points were, quite characteristically, carefully argued but firmly rooted in practical concerns.  His words also reflect a quiet confidence that was built on his recent successes 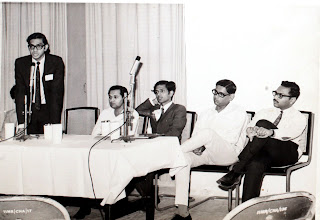 MBA Programmes - A Look Into the Future

In this session we are going to be examining the extent to which the Post-Graduate Programme of IIMA is suited for providing management skills for those who are entering management careers in Indian Industry.

Let us first look at the objectives of such a programme – as they should be and as they are generally accepted. A programme that prepares young men and women to enter management career should do two specific things. Firstly, it should provide an opportunity for developing skills and attitudes, which not only prepare an MBA to be a better newcomer to business but are also conducive to his growth and development as a professional manager. Secondly, this programme should impart sufficient knowledge on Management Science and its various functional areas both to help the young MBA obtain an overall viewpoint of the business, as also to adequately prepare him to get into the shoes of a manager and start doing the job within a fairly short period of his joining the organisation. Both are equally important.

The first point involves developing skills, which are most basic in nature. These skills, for example, are ability to seek relevant knowledge and data, communication skills, an enquiring attitude of mind and a scientific approach to problems. Basically, there is no reason why other educational systems and instituations teaching non-business courses cannot provide opportunities to develop these skills. However, my own limited experience suggests – and I am glad of this – that the MBA programme of IIM does this far more effectively.

Today the accent is on ‘Modern Management’. What is, however, not clearly understood is the fact that basically Modern Management is a concept, an approach, an attitude of mind and not just the tools and techniques. We ourselves are to some extent responsible for spreading this belief. A young MBA is therefore expected to be equipped with more knowledge and expertise in the functional area he says he has majored in, than most people working in the organisation. While it is unfair for the industry to expect an MBA to come with prescriptions to problems, I regret to say that we have generally failed to deliver even what is fair for the Industry to expect; and this is in terms of our functional knowledge.

Most MBAs are working in specific functional areas (at least in the first 5 to 7 years of their careers) and our jobs call more for functional expertise than for general management abilities during this period. We are faced with down-to-earth problems of designing sales promotions, winning list market share, buying raw materials at cheaper prices and so on. My own experience has led me to believe that depth work in functional areas has been lacking; that functional grounding has not been adequate.

This situation is particularly annoying for people with whom MBAs have to work. This is because the young MBA, not knowing how to arrive at the advertising budget for a particular product, starts asking a more basic but a less relevant question of whether the Company out to be in that business at all!
The Industry expects MBAs to know all the theories in the specific functional areas in which they are working, and the lack of this knowledge by itself makes them less acceptable in the organisation as change agents. An MBA who is merely saying that the problem ought to be looked at in a different manner without being able to suggest specific alternatives for solving the problem not only has a much weaker case for acceptance, but also tends to lose self-confidence.

There will always be some resistance at this stage of the game, but is important that the MBA feels confident that he can justifiably overcome the resistance. This he is unable to do unless he is properly equipped with knowledge to substantiate his case. Otherwise, the basic skills, which he has learnt, tend to remain unused and he runs the risk of losing them over a period of time.

Let us now try and see why we do not feel confident of ourselves when it comes to running our jobs in specific functional areas. Looking back at the two years’ curriculum of PGP, it seems to me that it is our pedagogy, which is responsible to some extent for the lack of depth knowledge in specific functional areas. While the case method is responsible for imparting the totality of perspective, the overall viewpoint of business, it also leaves less time and opportunity for learning the theory.

I personally believe that a departure from complete reliance on case method is necessary if we are to provide a balance between the theory and the approach. Equally important is the need to increase the share of Indian cases, if this has not already been achieved. I am by no means undermining the importance of obtaining overall viewpoint of the business. I am only saying that this must be supported by very sound grounding in one or two functional areas. I have no doubt that in the long run it is the basic abilities, the ‘approach’ that would put an MBA ahead of others, but in the short run it his ability to run a job which will facilitate his very acceptance in the organisation.

All this I believe is one area where the programs need to be strengthened. Things may have changed during the last 3 years and I do hope they have improved. However, from whatever little exposure I have had to the Institute since I left three years ago, including the last one month, I get the feeling that there is a need to strengthen the programme in this direction. Again my observations are limited to some functional areas and there may be some areas, which provide adequate depth work.

At this stage I would like to digress to look at how MBAs will fit in th e organisations in future years to come. There is no doubt that MBAs have an edge over non-MBAs. They are better prepared to enter management careers. But they still have to learn a great deal about the organisation and the way it functions before they can do any job effectively. Again they would learn faster than those do not have business education. They would gain an understanding of particular business fairly quickly and while this may not be strictly required for the specific jobs they do, it would prove to be very useful for their future development.

I am, however, disturbed to note that there is a growing feeling at the Institute that the MBAs do not require any in-company training. The two years, which we spend, here is not a substitute to the period of in-company training. The training periods must shorten because the people undergoing the training now already know something about business. To that extent the training periods have been reduced by a number of companies. Drawing on my own personal experience, I can say that there is an enormous amount to learn after getting out of the Institute and we ought not to miss this opportunity just because we are in the seller’s market.

In have taken the liberty of raising some of the points which I thought were important. While everyone here may not agree with all these points, these should provide a basis for discussion in this session.

*There is some doubt about whether the person sitting next to LRB is SL Chopra or Kamal Jhaveri. Former classmates have identified the person as Kamal Jhaveri. However, documentary evidence of this event (including a schedule and a copy of the speeches) list SL Chopra as the speaker.
Posted by Apoorva Bhandari at 19:03 1 comment: