Early in 1986, the U.S. Department of Education “discovered” (only partial sarcasm there) India, and The Darden School was given a grant to bring an Indian academician to Darden that year. I flew to India, and, with the help of VN Dalmia,  an alumnus, collected applications and interviewed three professors, including Labdhi Bhandari, at IIM in Ahmedabad. He was by far the best candidate and we made arrangements for his visit to coincide with the six week Executive Program (TEP) Darden runs every summer as a visiting scholar.

TEP’s attendance at that time was capped to 100 middle and upper-middle managers, who were taught in two sections. The arrangement that we made with Labdhi was A) he can attend as many classes as he pleased (he attended almost all), B) he teaches one class in each of the two sections and C) he writes a case. The last two are not part of the usual TEP arrangements, but his case was unique, and he was not only accommodating but, in the end, very pleased with the total experience.

American managers can be very aggressive and that took Labdhi by surprise. Under our system of teaching (the case method), the professor explains as little as possible, preferring only to guide the class discussion. Often there is disagreement amongst the participants and as well as between the professor and the participants. Pointing a finger at the professor and saying, “You are wrong”, a commonplace occurrence in America under the case method was not routine for him. Also unexpected to him was our request to write a teaching note as an accompaniment to the case he had written. The point of the teaching note is to bring clarity to sometimes convoluted cases, and it was my sense that Labdhi was very taken with the pedagogical value of writing the teaching note. The case he wrote was entitled “Enfield India" along with a teaching note and another note on India.

On a personal level, I remember Labdhi as being extremely polite, smart and someone who adjusted easily to an environment rather alien to him. At the beginning, he was rather timid, or, deliberate, in the class discussions, but he warmed up and became more of an avid participant as time went on. He was a good sport about everything. In the mid 1980s, Darden was not familiar with Indian cooking  – nor was he with the colossal portions that Americans tend to eat. In sum, other than his positive traits, I well remember his surprise at the harsh tone of the class discussion and the pedagogical value of writing a teaching note. He came several times to our house, but neither I nor my wife recalls what we cooked. Today one can buy almost as many spices there as here, but in 1986 Charlottesville was not yet wholly a part of globalization. Labdhi was a most welcome visitor.

* Prof. Leslie Grayson was Isidore Horween Professor of International Management, Darden Graduate Business School, University of Virginia, Charlottesville and has been Professor Emeritius since 2003. He was in-charge of the Darden School's global activity for 25 years and recruited LRB as a visiting scholar in the summer of 1986.

Posted by Anupam Bhandari at 16:54 No comments: 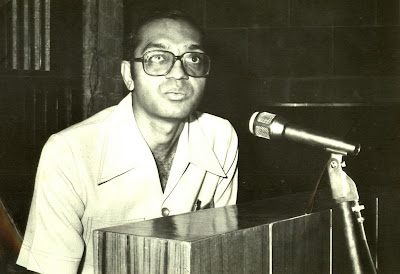 Posted by Anupam Bhandari at 16:43 No comments: