My brother, MV Arunachalam, worked on the board of IIM, Ahmedabad and he knew Labdhi; and I knew Labdhi because of my meetings with Vasant Mote and others during their management development programmes. When we took over EID Parry, the question of the board constitution came up. There was lots of turnaround work involved. So, at that time we thought we should have at least one academic person. And we knew Labdhi well enough to ask him and he was kind enough to accept. And that is how Labdhi came onto the board of EID Parry sometime in 1984.

The others on the Board consisted mainly of older people; N Ramanand Rao of State Bank of , Mr. PK Choksey, etc. Labdhi was one of the young people on the board. But he was most accepted and respected. He didn’t say too much, most often, but when he said something everybody listened to him. This was my impression. I used to attend once in a while. I came into the board a little later. 1988 was going to be our 200th year and so, we said that we must celebrate it well by turning around the company by then and doing a good job. 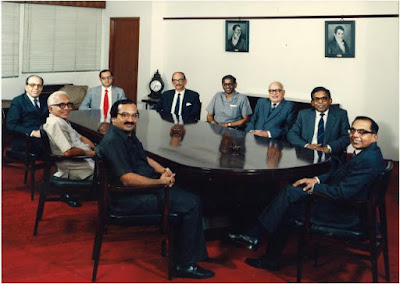 A meeting of the board of directors of EID Parry on it’s 200th anniversary in 1988. Mr. Subbiah remembers LRB (2nd from left on the far side) joking that he was probably smelling of naphthalene balls, because he rarely wore suits at meetings

He helped us, mainly, by looking at strategic issues - we were so diversified at that time, there was lot of trading and manufacturing was all fairly old. Not much of investment was going into manufacture. So, he said, we can’t continue to be this old ‘trading house’. Look at the possibility of focusing a little bit more. And also, regularly investing in plant and equipment. We realized that the last capital expenditure had been done in 1972…after that we hadn't any money to invest! So, that’s how he was quite instrumental in helping us understand that we needed to keep reinvesting in capital equipment and there were businesses we had to try and get out of. These are some very basic issues it might seem today. But, at that point of time, in that company, it made a huge difference.

As I said, he didn’t say very much. But, when it came to these kinds of issues relating to strategies and investment, he always had some specific comment to make which was very, very useful. With his unique background in academics, he was able to foresee some things that companies like ours just didn’t do, at least not at that time. Now, it might be regular run-of-the-mill, but at that time that didn’t happen. So, that was his main contribution,

When we went to IDBI for our financing, the first thing they would say would be that we want plans, we want projections and that sort of thing. The fact that we had somebody like Labdhi and some of the others on the Board made a difference. IDBI was willing to support us even without those plans and projections. So, there was a lot of credibility in his being there.

He was very soft spoken. Even in the Board he rarely spoke, but every time he opened his mouth everybody would listen very carefully. Very, very soft spoken and very, very warm person, as far as I was concerned. I mean, I used to know Vasant Mote, and Labdhi was quite the opposite. He was very quiet and would listen to everything. But, when he had to say something, he would wait till he got the eye of the chairman, and just say a few things. And normally, my recollection is, if he asked us a couple of questions, for us to find the answers it would take us take the next few days – like on capital expenditure. If he asked a question, by and large, we knew that we wouldn’t have the answer. And, I don’t remember correctly and there’s nobody around from those days to confirm, but I think we just had to drop a couple of things because we couldn’t find the data. Certainly, getting an answer to his questions was not easy.

* MV Subbiah was Chairman of the Murugappa group that owns EID Parry. LRB was on the board of EID Parry between 1984 and 1988. The  memories above were related to Ms. Vijalakshmi Rao who spoke to Mr. Subbiah in Chennai.
Posted by Apoorva Bhandari at 21:58