I had the extraordinarily good fortune of serving as advisor for Labdhi’s Ph.D. thesis at the Graduate Business School at Columbia University. In addition to Labdhi’s high intelligence and charming personality which endeared him to his colleagues and teachers, he had insightful empirical research skills.

Labdhi’s research focused on understanding the impact of the rapidly growing Indian population. He won a large grant from the Population Division of the Ford Foundation. He was very effective in dealing with international experts in these fields. This supported roots for so-called “social marketing”, which deals with the use of aspects of marketing skills to deal with social matters, such as nutrition and demographics. 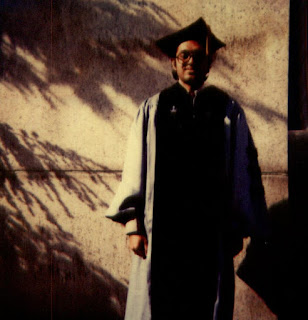 LRB after his graduation ceremony at Columbia University (date unknown)

Unlike many non-US students who claimed that they would return to home universities after completing a Ph.D. but did not do so, Labdhi became a professor at the highly regarded Indian Institute of Management in Ahmedabad. Over time, he became one of only a handful of recognized Indian academic marketing experts.

My role as Labdhi’s advisor led me to visits to India, which have continued over the decades. These visits led to multi-country research programs for me.

Labdhi helped arrange visits to several areas across India. He turned out to be an excellent and tireless tour guide. We went to the Taj Mahal and spent Independence Day in Delhi along with the President of Poland. We made a Northern circle which included Jaipur. A later Southern trip included Madurai and Madras.

Labdhi was, no doubt, in the vanguard of growing cadres of Indian Ph.D. students as well as Indian colleagues and collaborators in leading US business schools.

*Dr. John U. Farley was LRB's PhD supervisor at Columbia University and is now the C.V. Starr Distinguished Research Fellow of International Business at The Tuck School of Business at Dartmouth
Posted by Apoorva Bhandari at 14:48