I had known Labdhi in late 60’s and early 70’s when we were colleagues at Hindustan Lever. I joined the firm in 1968 as a management trainee, a year after he joined. Around 1970, I was involved in a pioneering effort at HLL, to use continuous consumer panels for evaluating test markets for new products and studying brand loyalty. As a manager in the operations research department during that period, I developed the required analytics for consumer panel data analysis. Apart from developing the analytics, I had to sell this new approach the marketing team and help institutionalize it. It being the first time continuous consumer panels and the new analytics were being used in India there was considerable skepticism and it took quite a bit of effort on my part and some strong support from a few colleagues in the Marketing group, to sell this new approach as a relevant tool/aid to decisions relating to test markets, consumer promotions, brand loyalty etc. Labdhi was one of the colleagues who strongly supported our effort and helped in the adoption of this new approach to analysis.

About a year or so later Labdhi moved from Product manager’s role to lead the market research team. While he was the deputy to an Expatriate Market Research Specialist, who headed the department, Labdhi de facto managed the team and client relations. He effectively leveraged his sharp intellect and experience/credibility as a product manager to transform the market research team from a group of technique-focused researchers to providers of relevant consumer and customer insight. During that short stint in the Market research department, he played a significant role in improving its credibility and acceptability. I also had the opportunity to work very closely with Labdhi, in late 1971 / early ’72, when I handed over my pet project of this consumer panel data analysis to his market research team.

During my long stint in HUL, spanning over three decades, I noticed that some young managers stand out from the rest quite early in their career and are seen as destined for fast growth to the top. Ladhi, in my view, was definitely one such young manager. He demonstrated a sharp intellect, questioning and determined mind and empathy in dealing with people around him. Even though he was handling responsible roles and seemed destined to grow fast, he was clear that he would want a wider canvass, across multiple industries to work with. He acted on his belief and quit HUL to join IIM where he could combine his academic interests and the opportunity work on consulting assignments across multiple industries.

Soon after that I moved out of marketing/marketing services into the commercial function. We lost touch for a while, and touched based again in mid 80’s when I was the General Manager – Corporate Development in HLL. By then he had attained considerable fame both as one of the outstanding professors at IIM Ahmedabad as well as a strategy consultant associated with a wide range of industries. 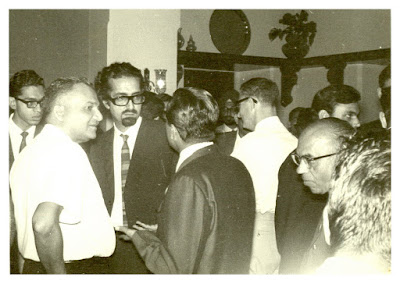 The 'thin, lean, young executive with a strong mind'
LRB (far left) at a Hindustan Lever Ltd. gathering, probably in the early 1970s

I will always remember Labdhi as I knew him in early 70’s, the thin lean young executive (I think he was the youngest among his peer group) with a strong mind who made a great impact on every assignment he handled during those early years in HLL.