I hardly knew Labdhi as a person while at the Institute. To all of us whose interests in Marketing and Product Management were kindled by his lectures and case studies, he was a learned, bright, not-so-friendly and at times sarcastic, but much-worshipped Guru; not someone you could crack jokes and discuss South Indian cooking with. But that's just what I did many years after leaving the Institute.

It was in March 1988 while I was working as Executive Asst to V.Krishnamurthy, Chairman, SAIL, that I got the opportunity to interact closely with Labdhi. Along with Prof Mohan Kaul, he was the Roundtable Coordinator for a conference on Public Enterprise Management: Strategies for Success, jointly organised by The Management Development Programme of the Commonwealth Secretariat, London and IIMA and held on March 6-11, 1988 at New Delhi. When he came to Delhi, Labdhi 'claimed' to know very little about the public sector and wanted help with 'preparation'. As EA to V.Krishnamurthy, who was then also the Chairman of IIMA Board, I was assigned the task of providing Labdhi all the background material, facilitating his meetings with senior managers in the public sector, etc. It was absolutely amazing to see him absorb what everyone spoke - he hardly took any notes, asked what seemed to me a few 'crazy' questions and just listened. In the few hours that I spent with him discussing and debating what everyone had said, I learnt hands-on how to aggregate information from different sources of varying credibility and relevance, synthesize it, build logic into inferences, think laterally for solutions and finally present it in an extremely structured and convincing manner.

Needless to mention, he spoke exceptionally well at the Conference. I attended the Conference mainly because I had been entrusted the task of taking notes for future reference (V. Krishnamurthy later headed a Committee that brought out the first White Paper on the Public Sector). What I found most amusing (and flattering as well!) was that Labdhi often chose to sit next to me in the back bench, whispering comments about speakers he did not agree with or found boring! He also complimented me openly for having helped him out and gave me credit for some of his analysis which I sincerely believe I did not deserve. He insisted that I come along for the valedictory dinner saying he would otherwise get bored talking only to the 'serious types'!! He was no more a Professor to me - he had become a good friend like so many of my batchmates at IIMA! I told him that my friends would probably be very surprised to know that he was just like one of us. To which he said "Don't tell them, that will spoil my image."

Believe me, I have not mentioned about this to anyone. I did not bring it up even at our 25 year reunion, though I was tempted to do so. But now, I would like to reach out to Apoorva and Anupam just to convey to them that their father was not just a Marketing Legend but a warm, friendly, modest, fun loving person with a great sense of humour. I still preserve one of the several chits he passed on to me during the conference besides cherishing very happy memories of my brief interaction with him. 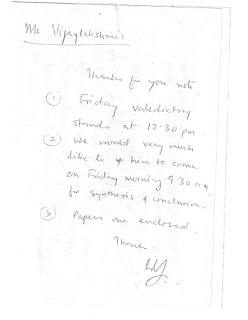 * Vijayalakshmi Rao was a student of LRB in 1980-82 and worked with him briefly in 1988. She is currently the COO and Director of Scope e-Knowledge Centre at Chennai.
Posted by Apoorva Bhandari at 23:21