Many of us carry in our heads to this day concepts learnt from 'LRB'. Among my several unforgettable lessons, one of them came to my use as late as three months back.

The case in the class was about a 2 wheeler company (which had Bajaj Auto written all over it) in our socialist years. The question posed was how the company should view the market for its products, and where the industry / own brand demands were headed and importantly whether the company should commit to a large capex expansion plan since recent years' sales of its products had shown extremely high growth rates. And there was the usual page fill about market research on product features liked / desired by the customers, data on previous ten years' sales by model, colour and the like, national income data for past years etc. And not to forget a 'honey trap' think aloud by the CEO about high operating leverage at the current scale.

I remember the case discussion was kicked off by one of our sincere classmates ('SC') who had run time series on demand data over varying past periods (which confirmed that growth rates were indeed accelerating), and had run a correlation with national income which (surprise, surprise) confirmed a correlation, and with the confidence of this analysis he went on to present his demand projection for next nine years (a momentum forecast which took off from the recent high sales growth). He would probably have continued his magnum opus by stating that the company should indeed be thinking of expanding but at this point he happened to notice a smile beginning to form on LRB's face and that rare occurrence froze him… 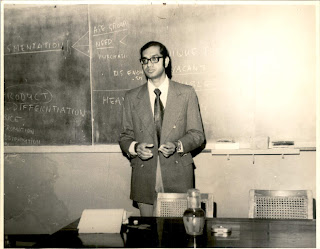 LRB (now with a full smile): Can you tell me the demand for this company's products in 2000?

SC (shuffling his notes): Sir I…. did not project that far since the expansion will probably pay off in nine to ten years.

LRB: Right. And what do you think you have projected? Sales or Demand?

SC (beginning to get nervous): Sir, sales results from demand and so my projections are demand.

Three slow nods of the head came from the SC. The lesson was clear… in a product shortage scenario, do sales reflect supply or demand?

We recently looked at a voluminous presentation from a large international investment bank on the Indian power generation sector which gave demand projections based on past data of energy sales. Reading it, I was reminded of the lesson from LRB. Clearly the bankers had not had the privilege of going to his class!!

* Rajeev Gupta was a student of LRB in 1980-82 and is currently the Managing Director of The Carlyle Group.
Posted by Apoorva Bhandari at 01:42